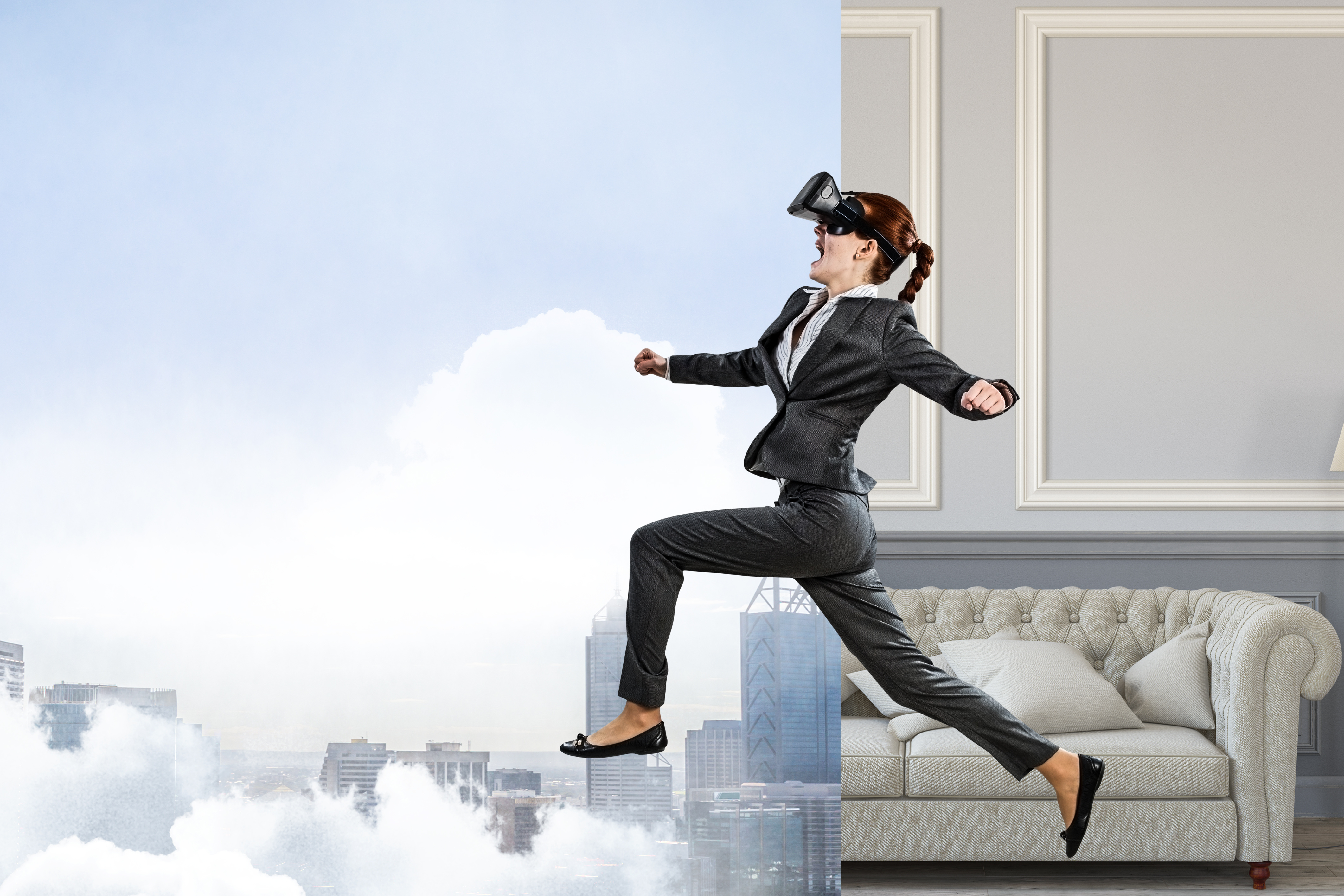 Picture this: You are in the country, on a trip through a pleasantly green, rolling landscape dotted with trees. It has a slightly dreamlike quality.

But this is no dream. It’s a visualization of your financial life, in which you work to save for a retirement you hope will come one day. And there are decisions to be made.

Suddenly, you’re stopped: You’re about to receive a tax refund, and a choice emerges: Save the money, or spend it? If you spend it, how will you feel when there’s a market surge, and you miss the gain? Do you regret not investing it instead?

This environment, part of an experiential virtual reality tool, is the latest twist on the traditional retirement calculator. Created by Fidelity Investments, it’s intended to replicate the feeling of market losses — and gains — without any real-life consequences. It comes at a moment when investment companies are paying greater attention to online tools while developing new ways to present retirement concepts visually and provoke more interest in financial planning.

Roshni Pattath, a 35-year-old senior quality engineer with the software company Red Hat in Raleigh, N.C., started saving in her 401(k) plan eight years ago, intending to retire at 55. But she said she realized she still had a lot to learn. She had never calculated the amount she would need to save for retirement before testing Fidelity’s virtual reality tool at the All Things Open technology conference in Raleigh last week.

“I was completely awe-struck by the whole experience,” Mrs. Pattath said after her first go at it. She started working on her investing knowledge more than two years ago when she realized she wasn’t contributing enough to her 401(k) to qualify for her company’s match. She does now. “I’m trying to learn more,” Mrs. Pattath said.

Other investment firms, such as Schwab Retirement Plan Services, are renewing their attention to the retirement calculators on their websites and view them as a gateway to other investment topics.

A survey of 1,000 401(k) plan participants sponsored by Schwab in March found that 52 percent of those queried had tried an online retirement calculator. Of those respondents, 71 percent “felt encouraged and wanted to learn more,” the company said, with 61 percent taking further action by either increasing their 401(k) contributions (48 percent), changing their spending habits (29 percent) or obtaining online advice (28 percent).

Most investors who visit Schwab’s website do so to check balances and contribution rates, according to Nathan Voris, managing director of business strategy at Schwab.

“Ten years ago, we would have said, ‘Oh, that’s why they’re visiting the website,’” Mr. Voris said. But over the last few years, the firm has redesigned the site to test the assumption that people may want to do more than check a balance and could be motivated to make changes right away. On the site, Schwab sandwiched its calculator between the balance and contribution level to allow investors to alter their contribution rates immediately.

“It’s simple, it’s not intimidating and you can take action at that moment,” Mr. Voris said.

Sonja M. Haggert, 66, of West Point, Pa., said she depended heavily on financial calculators to prepare for her retirement in 2004 from a company that made water and air filtration products.

“I do love calculators because they tell me what’s going to happen in the future,” Mrs. Haggert said. “We just felt like there are so many things we want to do, we might as well prepare.”

The calculators helped Mrs. Haggert track her household budget when she was first married and later, estimate what she and her husband would need in retirement, she said. While no calculator can accurately predict market corrections, she said that continuing to save roughly 10 percent of their salaries through various bear and bull markets over the last three decades helped them stay the course. “We knew if things were bad, they were going to turn around,” she said.

While calculators can help savers project how their portfolios will grow and better visualize the compounding effect of increasing savings, they have limitations.

They can create a false sense of security, especially if their components are not well understood, according to Jonathan Clements, the author of “How to Think About Money” and editor of the website HumbleDollar. Retirement calculators can vary widely based on assumptions like projected market returns or inflation, yet many investors overlook these complexities and effectively trust the black box calculations, Mr. Clements said.

“Those are the calculators that probably work best for most people, but they can be horribly wrong,” he said. Workers could underestimate the rising costs of living, for example, or fail to account for setbacks like a health crisis or divorce.

At Vanguard, the emphasis has shifted to eye-catching visuals and away from presenting lots of information in dense text, according to Shannon Nutter, a principal at Vanguard who oversees participant strategy. The firm’s research shows that people who log on stay on for less than 30 seconds, she said.

“We literally have a handful of seconds — 15 to 30 seconds — to catch their attention,” Ms. Nutter said. When shown a potential savings gap, 15 percent of people click on a visual element with the message “you need more money every month,” and of those who do, one-third take a step, such as increasing their contribution, she said.

Vanguard also began translating the benefits of increased savings into relatable, everyday sums, based on research showing that many people have a harder time intuiting percentages than they do monthly sums of money. For instance, telling savers to increase their contribution by the equivalent cost of two pizzas a month is more effective than telling them to sock away another one percentage point of their paychecks, Ms. Nutter said.

Fidelity, too, has moved away from displaying seemingly unattainable large dollar figures to presenting savings goals in more manageable terms. The firm built its website around this rule of thumb: aim to save the equivalent of a year’s salary by age 30, rather than amassing 10 times your salary by your retirement date, according to Jeanne Thompson, head of workplace thought leadership at Fidelity.

“It can be overwhelming for people. It is so far off, it’s hard to wrap their head around it,” Ms. Thompson said. “How do we break it down and make it more digestible?”

Virtual reality may prove to be part of the solution for making retirement planning feel more immediate. Adam Schouela, Fidelity’s vice president of product management, said he wanted to approximate the experience of retirement with the V.R. tool. The experience begins when you put your headset on and see yourself in a small room. Then you can personalize your settings, selecting your age, salary, the percentage of income you’re saving, your current portfolio and your tolerance for risk.

Next, you find yourself on a balcony overlooking a vista with a green path stretching into the distance. You push a button and are transported, virtually, onto the path, along which you advance in five-year increments. At each turn, there’s a risk or a chance a “life event” might happen, such as a tax bill or refund or a child’s wedding that could affect your finances. And each turn sets off-market simulations that can speed you ahead or set you back. You can adjust your investment strategy or contribution at any point.

“I’ve watched customers go through it with saving very little toward retirement of 1 percent or 2 percent, and by the time they got to the end of the green line, they say, ‘Wait a minute, I can retire now, but I’m 97 years old,’” Mr. Schouela said.

Alesia F. Hardy wasn’t surprised when she tried Fidelity’s virtual reality tool and learned that, at her current savings rate, she couldn’t retire until her 80s. Ms. Hardy, an independent data analyst, sampled other calculators in the past, which showed her similar projections. But she said it felt different to watch a market correction diminish her portfolio and create confusion about her investment choices.

“When I did see the number shrink, it wasn’t a good feeling,” Ms. Hardy said. “I wondered, should I get out of this or should I stay in it?”

“It’s important to know how I will look by the age when I plan to retire based on what I’m doing now,” she said.

This article was written by Elizabeth Harris from The New York Times and was legally licensed by AdvisorStream through the NewsCred publisher network.