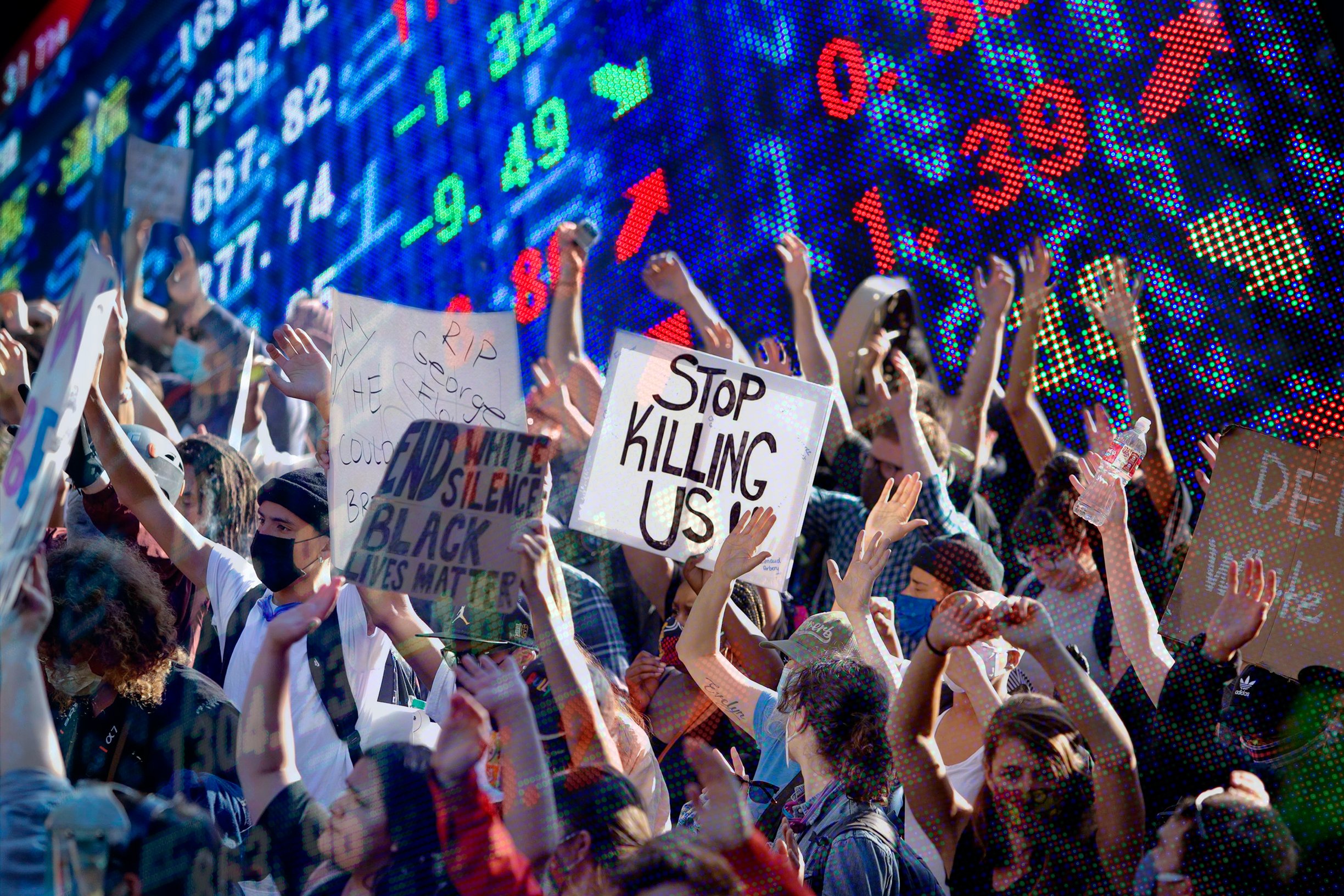 America seems like its on the verge of collapse. But not the stock market.

On Monday, as cities around the U.S. grappled with clashes between racial justice protesters and police, and looting went all but unchecked, the Dow Jones Industrial Average closed up 92 points. Tuesday it was up another 150 points in midday trading to 25,630, the highest point since mid-March.

The stock market’s placid reaction may seem incongruous at a time when, to anyone watching cable news or reading a newspaper, the U.S. appears to be in the middle of a national emergency.

But while the stock market can at times seem like a daily national temperature gauge, investors (many of whom, it’s worth noting, aren’t American) don’t necessarily think the way the rest of us do.

With the caveat that no one knows exactly why the market does what it does, here’s why investors are likely ignoring the turmoil on U.S. streets.

The stock market is what’s known as a “leading indicator” for the U.S. economy. Stock prices tend to react on a hair-trigger to what traders think the economy will look like in six months or a year’s time.

For that reason, the stock market plunged when it became clear the coronavirus would halt large swaths of the U.S. economy — and it was still unclear how long lockdowns would last. In the past few weeks, much of the U.S. has (tentatively) re-opened.

Unlike the lockdowns, which were largely in effect across the country, protests are concentrated to a handful of big city neighborhoods.

Elsewhere the recovery continues apace. Indeed, the past few days have showed signs the housing market is quickly recovering, while oil prices have climbed steadily, as Americans start driving again.

Many investors seem to be betting that these trends, rather than the broken shop windows and sad images shown on the news, will be what shape the next six months for the economy.

Of course, with 15% unemployment, one area of the U.S. economy that’s reeling is the labor market. And indeed, while focus of the protesters has been police brutality, it seems likely that anger on all sides has been exacerbated by the stress created by lost jobs and missed bills.

But even before the protests, commentators had been noting — and worrying — that the stock market seemed to have “decoupled” (that is no longer reflected) what was happening in labor markets.

While no one knows for sure why this has happened, there are several commonly cited explanations, all of which are probably true in part. One is that investors, looking at other economic data, are simply optimistic that hiring will roar back in a few short months, as the virus fades from view.

It’s worth noting that in many cases that white-collar workers tend to be the ones who own stocks, both because they make more money and because their large corporate employers are more likely to offer perks such as a 401(k) plan.

One additional factor driving the stock market isn’t the result of investors’ bullish views on the economy at all but, in fact, something of the opposite.

For years, in the wake of the financial crisis, and also more recently as the coronavirus hit, the Federal Reserve has held interest rates at historic lows in an effort to boost growth and hiring. That may be the right move for the economy, but it’s also arguably distorting stock prices.

Right now the yield on the 10-year Treasury note is a remarkably paltry 0.67%. By contrast, a recent report by the Cleveland Fed pegged market inflation expectations over the next decade at 1.2%. In other words, owning the market’s safest bonds right now might be a losing proposition.

The upshot: investors are buying stocks not because they love the outlooks of the economy, but rather they have nowhere else to put their money.

This article was written by Ian Salisbury from MONEY and was legally licensed by AdvisorStream .